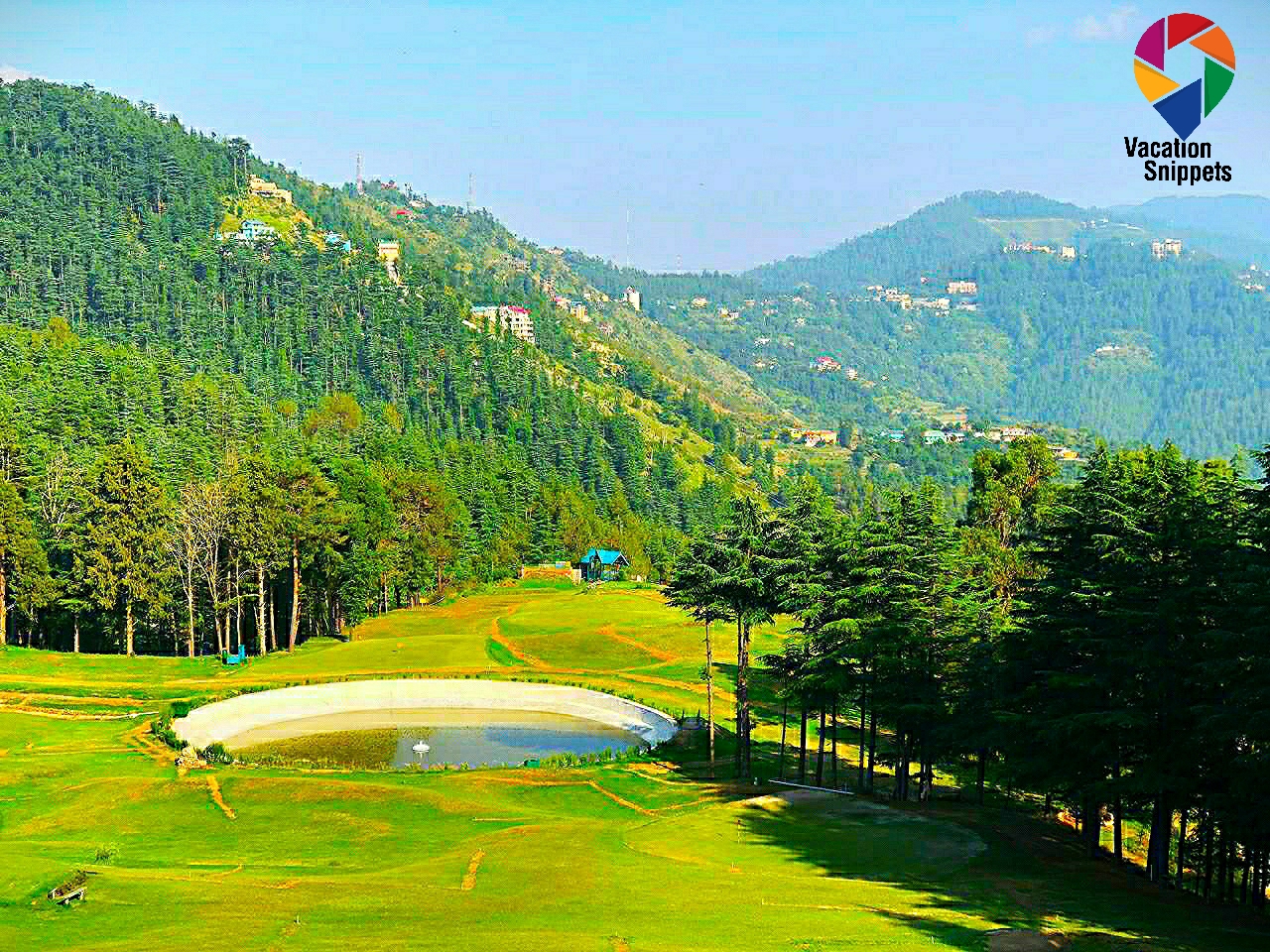 Being a born Scorpio, ‘I desire’ is my zodiac motto. I desire to see, to explore, the charms offered by nature. Also, I love the path which is relatively unexplored. I love the road circuits which are treacherous and rarely visited. Ever since I made my travel bucket list, I always wished to drive down to Tattapani and soak myself in hot water from Sulfur springs. This rejuvenating bath, followed by a splendid Golf View at Naldhera and finally, a relaxing walk amidst greenery at Mashobra.

The drive to Tattapani

With just one day’s leave on July 1st 2019 and three places to explore, five of us left Gurgaon at 04.00 hrs on 29-Jun-19. The car was stocked with all sorts of eatables, yet we all yearned for hot parathas along the highway. The weather was salubrious and traffic was thin. Soon XUV caught up in triple digits and in a jiffy we crossed Sonipat, Panipat and Karnal. We stopped for breakfast at Mayur Dhaba, just opposite to Savoy Greens.

We satiated ourselves with the breakfast, we started finding the reason for another stop at Verka milk shop on Ambala-Chandigarh highway. The temptation was too hard to resist. The elaichi flavored milk at Verka soothed our nerves. Time read 08.00 hrs when we started from Verka for Himalayan Expressway.

As we climbed hills, we expected the air to be cooler, traffic to be thin, and the road to be in excellent condition. We plan, God laughs…Dev Bhoomi – as Himachal is fondly known as, proved us wrong yet again. The weather was at its worst with scorching heat and sun blazing its fury towards us. Due to the Kalka-Shimla highway, 4-lane work roads were in wretched condition with only one single-lane working at multiple stretches. And traffic, ah, it was a nightmare. It being the last weekend before schools reopened, it looked as if half of Delhi was heading towards Shimla. We crawled and finally reached outer Shimla by 12.30 hrs.

We took an early lunch break at one of the roadside dhabas. The food was simple yet delicious. We badly needed to refuel and refresh ourselves. A quick splash of water on my face felt heavenly. Soon, we resumed our drive to Tattapani. As we crossed Shimla, the air finally got cooler and traffic got sparse. The final test was just before entering Tattapani. We encountered about 8-10 hairpin bends which tested my driving skills and my passengers’ resolve to control throwing up freshly eaten dal-roti. We reached Tattapani Hotel Sandhya Hot Spring Health Care by 14.30 hrs. It took us almost 10.5 hrs with 3-4 breaks amidst heavy traffic and potholed under construction road.

The check-in was a breeze and the rooms were comfortable. It had LCD TV, AC, a small fridge, Geyser, a cozy bed, and a small balcony overlooking the hotel garden. The other side of the rooms faced the flowing river Sutlej. Overall, a nice quaint hotel in the lap of nature. The best feature of the hotel was a small 20 ft by 10 ft hot sulfur bath. We knew about this beforehand, hence carried our swimming trunks all along. Water was genuinely hot and a pungent sulfur odor was emanating from it. If one can bear the odor, water was really relaxing.

In the evening, after the hot therapeutic bath, we strolled across the verandah overlooking the river. We ordered hot tea with pakoras and watched the sunset across the mountains spreading its soothing yellow-orange light over the horizon. The quiet sunset behind the hills overlooking river Sutlej offered a majestic view. Slowly, the air got cooler and soon we had to return to our rooms. The day which had started at 04.00 hrs finally came to an end around 21.30 hrs.

I got up around 05.30 hrs and went outside for a stroll. Tattapani was a lazy town and I didn’t encounter even a single soul while walking over the bridge on river Sutlej. The sun was also slowly rising above the mountains spreading its bright yellow light. Air was still cool and the serpentine river was casually flowing over the river bed. In one word, it was tranquil. I loved this place. It had a lazy charm of its own. Slowly, with sunrise, the sleepy town woke up from its slumber and got involved with its daily activities. By the time it was 07.00 hrs, I returned to the hotel to get ready.

All my family members were awake and chit-chatting. The hotel had a table tennis table placed on the porch next to the garden. We all tried our hands at table tennis. Old sweet childhood memories got refreshed while playing. By the time we were done with games and breakfast, it was almost 10 am. We started for Naldhera and stopped at Tattapani bridge for some pics. As a truck passed our parked car, the bridge beneath started shaking. Momentarily, we were scared. It was a moment, which passed in a jiffy.

A short uphill drive of an hour from Tattapani took us to Hotel Golf Glade Naldhera which was run by HPTDC. The rooms were strictly basic, had no fan (forget AC), nothing other than basic furniture. The only ‘extra’ company we had were monkeys, in abundance.

There were so many monkeys around that at times we felt threatened by their sheer number. Their restaurant was just 2 mins walk away, so we decided to have lunch there itself. However, the food at their restaurant (Cafe Tee-Off) was pathetic and the service was extremely slow. The ‘chilled’ beer served was almost lukewarm. Can’t say whether the food was bad or the service was worse.

We went back to our cottage and after resting for a while, we walked to the famous Naldhera Golf course but found that only members are allowed inside on the golf course.  There was a small bar that overlooked the golf course. Here, the beer served was chilled and the French fries were amazing. India vs England Cricket World Cup match was being played at Edgbaston that day, which we watched on our cell phones on Hotstar enjoying the green pastures of Golf Course, from a distance.

In the evening, we walked along the highway towards Shimla. Seeing the sun settle down behind mammoth hills spreading its colorful hue was a splendor to watch. A stroll on hills provided the much-needed feel of the hill station. For dinner, we went to Woodstock Cafe and Restaurant, which was nearby.  The food and service were better than lunch but still miles behind the experience at Gurgaon’s basic restaurants, though it was equally pricey. We called it a day around 22.00 hrs.

We left Hotel Golf Glade around 08.00 hrs the next day for Craignano, which is supposedly a beautifully well-maintained park at Mashobra, a green lung suburb of Shimla. The road was bad and it took us almost an hour to reach there. However, I was disappointed. There was nothing unique for which we drove all the way to this place. After a quick walk and about 20 pics later, we started for Shimla and decided to have a quick breakfast in the city. Seeing the traffic towards Shimla, we took the bypass road and stopped at Malyana at a restaurant named Crazy Grill. The food was delicious though the service was average, but worth the wait. Time read 11.00 hrs when we left after having breakfast.

The drive back home

The home was still around 400 km away and the GPS lady was showing another 8 hrs drive. The air was getting warmer as we were on descent and the sun was right above our head. Traffic too was getting thicker. As advised by the restaurant owner, we took an interior road which directly joined at Shoghi. This saved about 30 mins. Google maps might be good but nothing beats a local guiding you to your destination. On the way, we stopped for lunch at Giani’s dhaba near Dharampur. The service was quick but the food was strictly average. The drive to Delhi on the plains was uneventful. By the time we reached home, it was around 20.30 hrs.

Three days had gone in a jiffy. Among the places we visited, I found Tattapani to be the best, while Mashobra was overhyped. Had we been allowed to tour the Naldhera Golf Course, it would have been a great experience. Still, travel to these off-beat places was a great experience.

In three days we drove about 900 km. My XUV performed exceptionally well and despite its grunts on potholed roads, the engine remained peppy and zealous to climb up the hills. This beast has no parallels. The quick vacation ended in the blink of an eye and we returned to our mundane monotony of life with good memories, planning another vacation soon.