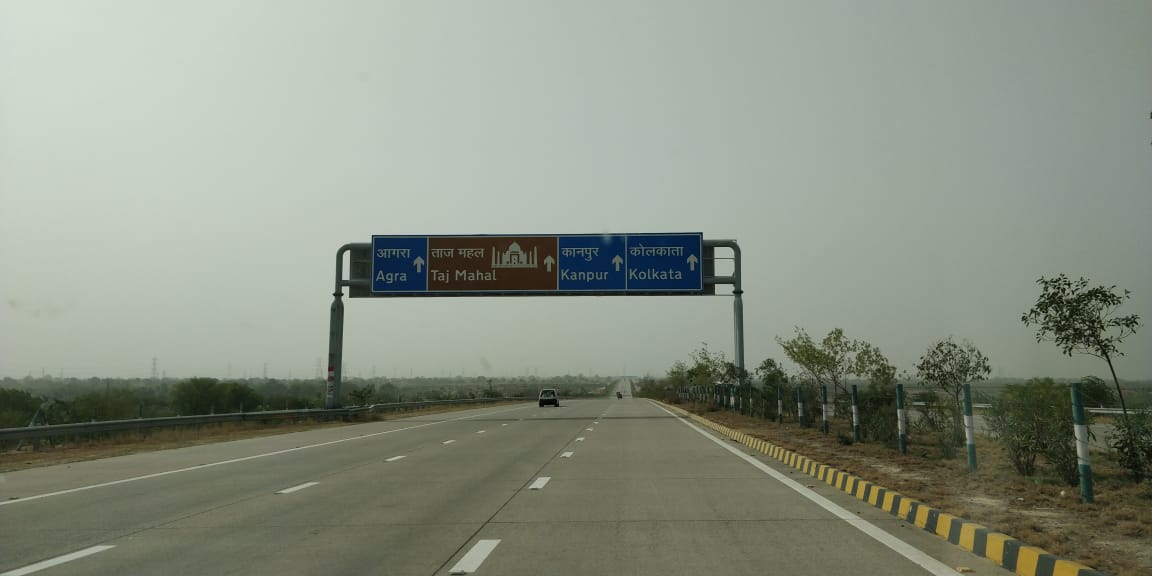 It has been more than a year since I have visited Kanpur. Since last 4-5 visits, the maximum duration I have stayed at Kanpur was one night. This time it was no different. My parents and my kid had gone to Kanpur on a Wednesday by train and they had asked me if I could drive down to Kanpur on Saturday and then we all could come back to Gurgaon on Sunday. The plan was simple and executable. No special preparations were needed for the trip.I was going to drive my XUV. Ritika, my sister, planned to join the drive. Just a day prior to travel, I bought a few orange juice packs and a few coke cans. Since it was just a day trip, just one pair of clothes were needed. The plan was to leave by 5am and reach Kanpur by noon to avoid the scorching Jun sun. The route we had planned to take was Gurgaon-Greater Noida – Yamuna Expressway – Agra Lucknow Expressway (Etawah Exit) – Etawah – Auriya – Kanpur. It was around 500 km drive to Kanpur which we expected to cover in 7 hrs.

We got up by 04.30 hrs as I had slept a bit late. By the time we had left home, it was about 05.15 hrs. The traffic was sparse as it being a weekend morning, Gurgaon was still asleep. Even the sun got lazy and didn’t peep out of clouds revealing its streaks of sunlight. We took the Golf Course road, which joined us at NH-8. Once on the highway, traffic picked up as it was time for morning flights. Since there were no jams, it took us barely 20 mins to take Vasant Vihar exit onto Outer ring road. Google GPS was in a good mood and showed us blue tinge all along. It guided us to take Ring Road and next DND flyover. By 06.00 hrs, we were on Noida-Greater Noida Expressway. This was a record time in which we had reached Noida. I further pushed the accelerator pedal and XUV guffawed initially but then sped up to triple digits. Within next 15 mins, we took the ramp to Yamuna Expressway. We had covered 60 km in one hour.

Yamuna Expressway is an engineering marvel with excellent road quality but cemented one (not tarred road). This leads to more friction in tyres and causes air to expand due to heat build up. At higher triple digit speeds, the air pressure expands dangerously and sometimes causes tyres to burst. Whoooh, I always wanted to write this technical stuff in one of my blogs and here it is.

The clock showed 06.15 hrs. Neither me nor Ritika was hungry. However, as we saw a board advertising Vaango, Subway and Costa Coffee, we decided to halt there for breakfast. XUV was in a good mood and the mileage displayed on screen was 14.7 kmpl,  which is outstanding considering the weight of the car and automatic engine.

As the speed touched 120 kmph, I switched the Cruise Control ON. The speed limit here was 100 kmph. I acknowledged that I was driving beyond the speed limit, but a message on electronic display board made it look insignificant. Someone had touched a speed of 195 kmph on Yamuna Expressway and it was being flashed that this car (registration number was being flashed) would be fined at the next toll plaza. Aah, we were driving at snail’s pace.

At the first toll plaza, we paid Rs 415 (around $6.5) up to Agra. Well, paying so much toll always pinches but the upkeep of this expressway is amazing, totally worth the toll. We stopped at the food plaza for breakfast. Time read 07.30 hrs. I hogged on a dosa from Vaango while she preferred Subway sandwich. The quality was unquestionable however the price was high. 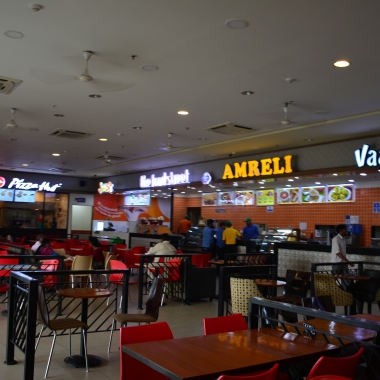 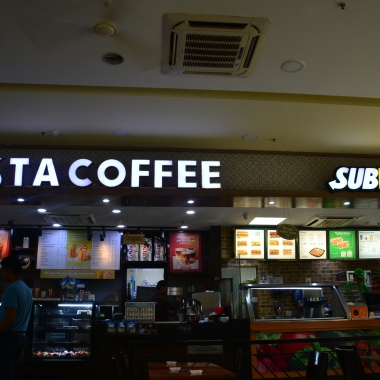 By the time we started, it was already 08.00 hrs. The traffic was picking up. We kept on going straight and soon reached Agra. There was another toll of Rs 35 at the interchange between Yamuna ExpressWay (YEW) and Agra-Lucknow Expressway (ALEW), which I believe was unnecessary. When time read 08.35 hrs, a left ramp took us to ALEW.

This road was fortunately a tarred one. The quality was excellent but it was less broader than YEW, specially the shoulder part of the road. Soon, a third toll arrived and we had to shell out Rs 160 till Etawah exit, which was 76 km away. Once again, as XUV cruised to triple digits, I switched the Cruise Control ON and sipped on Thums up Charge…This was an extra strong one. Ritika too, despite working for Coke, guzzled a Pepsi. I clicked her pic while she was enjoying her Pepsi. Brand Loyalty and ID cards are displayed at office only. Here, ‘Pepsi – yeh dil maange more’ was the mantra.

We covered 76 km on ALEW in 40 mins. Time read 09.30 hrs when we took the Etawah exit. As we hit the NHAI developed highway, a barrage of construction dust hit us. Jaswant Nagar, was in a plume of dust. The XUV’s speed dropped from triple digits to 20 kmph in a matter of seconds. My beast screeched continuously while negotiating the potholed road. Its grunt was loud and visible. No one likes potholed road, and certainly not the urbane XUV. Next 15 km were the hardest to deal with, till we crossed Etawah. Slowly and gradually, road quality improved while traffic density decreased. XUV regained the triple digits speed. Kanpur was still around 140 km away. GPS showed ETA at 12.10 hrs. Somehow, I wanted to reach Kanpur in ‘good morning’, so I stepped up on gas. The road was deserted and tar quality was good. Soon, we zipped past Auriya and then Surya dhaba. The ETA gradually went down to 11.45 hrs. We paid Rs 145 toll too, which was by far the costliest on NHAI highway. By the time, we entered Kanpur city, time showed 11.20 hrs. As we turned towards Panki, city traffic and narrow road slowed us down further. By the time, we reached Vijaynagar crossing, speed was barely 5 kmph, we literally crawled and jostled for space with other cars, street vending carts, vegetable sellers, cycle rickshaws, garbage studded sides of road and leisurely strolling cows. This was the same Kanpur I remembered always. Finally, I was in my city and it welcomed me in the same way. We reached home at 11.45 hrs, the way GPS lady had predicted.
I was surprised to see that electricity was coming. We had this liberty to switch on AC and enjoy full blast of chilled air. Has Kanpur improved so much? No power cuts, really? It was then when I was told that due to Eid today, there will be no power cut. Wow, so much for a quota of votes. The city hasn’t changed, nor have the politicians.
Full day was spent meeting relatives, having good home cooked meals and chit chatting about old days and new responsibilities. It was fun. In the evening, we decided to have chaat nearby. We drove to Lajpat nagar. The chaat shop was in a narrow lane. I parked the car carefully almost to the side of he road to allow vehicles to pass by. However, a water supply tanker parked his vehicle haphazardly which blocked half of the already narrow road. Soon, chaos followed. Bikes and rickshaws squeezed their way and maneuvered their way. I must admit, I was worried that they may dash in to my car and scratch it. the focus got shifted to chaat once I had the first spoon. Earnestly, Gurgaon doesn’t serve so delicious chaat. It may be more hygienic there but this was real bliss…delicious. The next stop was kulfi falooda at Agra Sweet House and sweets at Banarsi Misthan Bhandar.

All those old memories of school days at Kanpur kept coming back. Nostalgia engulfed me and I wanted my son to enjoy all those delicacies, the way I did when I was a kid. I did try to hog everything that Kanpur offered in that short span of time but somehow missed the famous Banarsi Chai at Moti Jheel. Got to know that his shop shifted elsewhere…may be, I’d try finding him next time.
The next morning after breakfast, we left for Gurgaon around 10.30 hrs. Since my mom had shopped to her heart’s content at Kanpur, XUV’s boot was full to the brim.

It was a hot day. Temperature was already hovering around 40°C. It was sweltering hot outside. My parents were already monitoring the speed continuously. We did not stop anywhere as we wanted to reach expressway soon. By the time we entered ALEW, time showed 13.00 hrs. As we started driving here, I put the car in cruise mode with speed as 120 kmph.
Within next 45 mins, we were at the starting point of YEW. Two more hours till Pari Chowk. Time showed 13.45 hrs. It being lunch time, we were hungry. We saw a board showing Subway, Vaango etc. around 55 km away, which would take about 40 mins to reach. I kept driving and by the time we reached the food joint,clock showed 14.30 hrs. It was very hot outside. Hot wind was blowing. It seemed as if it was draining energy from our bodies. We had our lunch while my son enjoyed an ice-cream too.By the time we finally started from there, it showed 15.15 hrs. Feeling refreshed, I pressed gas pedal hard and soon XUV cruised around 120 kmph. The road was good and so was the temperature inside the car, infact, just perfect… climate controlled at 20 °C. Soon we reached Pari Chowk at Greater Noida. Clock showed 16.15 hrs. A day before, we had travelled home to Pari chowk within an hour. It was impossible today, during day time.The speed again dropped to 60 kmph and got further reduced near Kalindi kunj. This was the most stressful part of driving, negotiating the way and jostling on the road with other cars.Finally, by the time we reached home, it was around 18.00 hrs. Thankfully, it was a Sunday else office rush hours would have further delayed our return home. Overall, it was a quick sweet trip with lots of driving and nostalgic foods. We drove more than a thousand kilometres in two day, on one of the finest roads of India.
One song which reverberated in my mind during entire trip was from the movie Parichay –  “Musafir hoon yaaron~~”…humming that songs during long lonely stretches of YEW and ALEW was soothing. Just to check how soothing it is… after a heavy lunch of chole bhature and lassi on a hot Sunday afternoon, lie down on a lazy couch, put the AC on full blast, dim the lights, blind the curtains and play this old melody on your ipod. Absolute bliss… nostalgia is bound to engulf you. If it still doesn’t, perhaps, you need to create more memories of road trips.

"An Engineer by Profession, a Traveler by passion, an explorer by nature and a novice photographer by will". On VacationSnippets, I am going to share my travel experiences... I usually plan road trips with my family and friends to hills and National Parks. My longest Road trip was from Bangalore to Gurgaon, a journey of about 2500 km in 3 days. Whatever your feedback on my travel blog... good, bad, ugly, right, wrong... be brutal and honest... feel free to post. I also post my reviews on tripadvisor. My URL is :https://www.tripadvisor.in/Profile/gauravkhattar View all posts by VacationSnippets